Maybe it is not a correct dose distribution

Dear FLUKA experts,
I have some doubts about the dose calculation result of recent FLUKA versions. The model is few hundreds proton beam incident into a cylinder iron target, which is a little larger than range of proton in iron. The target is surrounded by a concrete spherical shell. Here is the input file.
dose.inp (2.1 KB)
I tried to compare the shielding data of FLUKA and some literature. Also the same works have been done by the following references([1] Agosteo, S. , Magistris, M. , Silari, M. , Zajacova, Z. , & Mereghetti, A. . (2007). Shielding data for 100-250 mev proton accelerators. Nucl.instrum.methods Phys.res.b, 265(2), 581–598.[2] Agosteo, S. , A Fassò, Ferrari, A. , Sala, P. R. , Silari, M. , & Fatis, P. . (1996). Double differential distributions and attenuation in concrete for neutrons produced by 100–400 mev protons on iron and tissue targets. Nuclear Instruments & Methods in Physics Research, 114(1-2), 70-80.)
From these references, we can get a conclusion: the radiation in front is stronger than the vertical and backward, and this phenomenon becomes more pronounced as the proton energy increases. However my calculation results didn’t agree with that, as shown in figure.

The above conclusion is a sound physics fact and as such it cannot be put in question as a function of the code version. If your results contradict it, there is likely some basic mistake in your calculation or misunderstanding in your analysis.
(You seem not to have uploaded any figure; with meV, you actually meant MeV, and ‘few hundreds proton beam’ should read few hundred MeV proton beam).

Dear Francesco Cerutti, thanks for your early reply. The source is few hundred MeV proton. The network was down,so I will re-upload some figures. 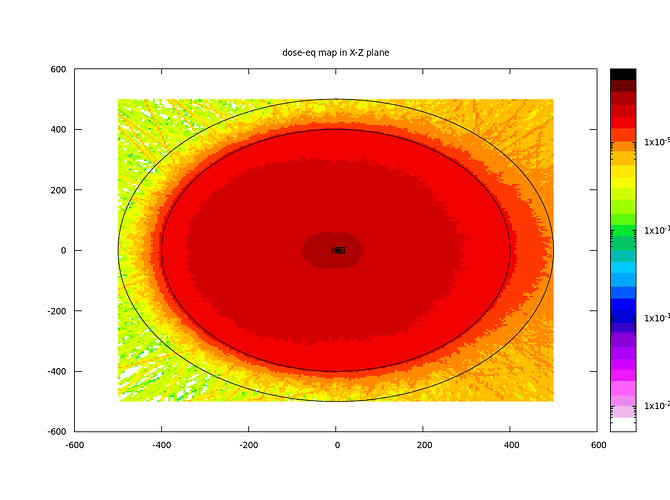 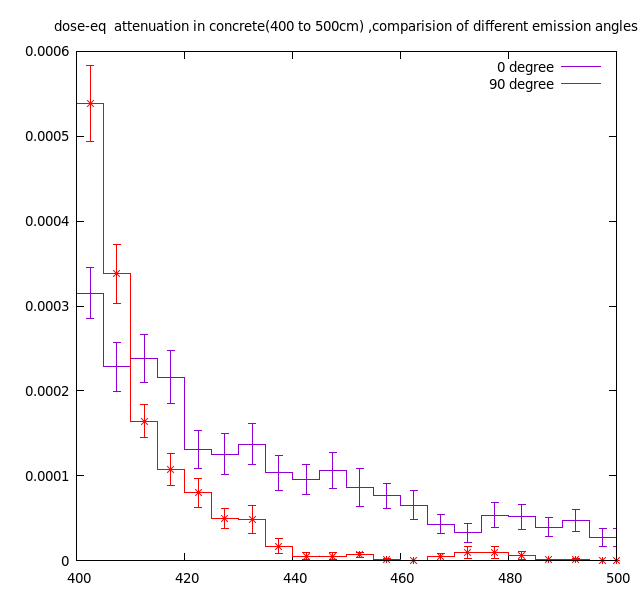 Fugure1 shows the dose map calculated with the above input file, Figure 2 is attenuation in different emission angles, which seems contradictory.

figure42209×1953 2.17 MB
Figure 3 was calculated by an older FLUKA version,Figure4 is the result of new version. The shielding walls were different ,but it almost have no influence on the radiation field. The energy and target were same in figure3 and figure4. And I use PRECISIO defaults card in all calculations. I wonder is there some physics card updated in new FLUKA version? Then how to set physics card in radiation shielding of intermediate energy proton accelerator ?
Looking forward to your reply. Thanks.
totto (Thomas Otto) 12 May 2021 13:43 #5

As Thomas @totto remarked on your Fig 1, results look as expected. This is also visible in a revised version of your Fig 2 (that I’m not sure how you produced): 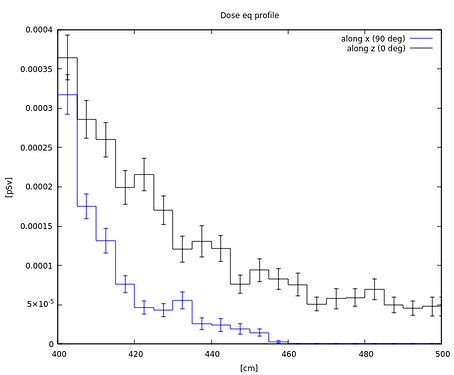 As for Figs 3 and 4, before comparing them, one needs to figure out what is the extension of the interval in the third dimension (apparently y, orthogonal to the considered xz plane) over which dose values are averaged. Plotting a 1D or 2D distribution from a 3D map without specifying the ranges of the missing dimensions that are considered to average, is rather meaningless.

So, the problem does not appear to be related to physics cards, whose possible update normally has no vocation to revolutionize basic physics outcome, rather to the manipulation and interpretation of results.

Thanks@ Thomas Otto
The dose in forward direction is a bit higher than in lateral, which is shown in Figure2. However I found this apparent contradiction with Ref [1] . Here is a summarised data table in Ref [1] .

Hello@Francesco Cerutti. Thanks a lot. Seems you have run my input file. Do you have any suggestions with it?
As for 1D plotting, I have limitted the other two dimensions. In the same way ,Figure 3 is ploted by limitting Z coordinate,which is the strongest layer.
As replying to @Thomas, the dose rate in forward direction should be much higher than that in lateral.

As the logarithmic version of (my) Fig 2 (obtained with your own input, and better statistics than above) shows:

doseqlog670×549 13.8 KB
the dose rate in the forward direction IS much higher than the lateral one (roughly by two orders of magnitude behind 1 m of concrete). I think this shall close the debate about supposed calculation mistakes.
As for the comparison between Figs 3 and 4, assuming that both refer to a comparable averaging interval along the third missing dimension, you should still consider that the color scale spans more than 11 orders of magnitude in the original case and only 6 in your case. A similar range should be taken for a fair comparison. Anyway, as already pointed out, the reason for any discrepancy in this regard should not be searched for in FLUKA versioning, rather in result analysis (or input differences).
wd0001 (Wang Xiansheng) 19 May 2021 13:04 #10

Thank you@Francesco Cerutti.
The attenuation data should be shown in logarithmic plot, which is convenient for comparison. The source term data and attenuation data are approximate to literature data. This will make me believe the validity of fig 3. As for the color scale, I think it doesn’t change the shape of dose map.
Best wishes!