My simulation is a proton beam(70MeV) incident on a metal target(there exist water channels inside target). I want to know the specific positions where protons stopping inside the target. Therefore could you please tell me is there a way to do that or how FLUKA can simulate proton annihilation in Ta and other materials?

Thanks in advance.
Best regards,

Protons do not annihilate, they stop (or disappear in nuclear reactions). Put a USRBIN scoring card to get a proton fluence map and you will be able to see which volume the protons travel through.

Dear Francesco,
thanks a lot for your response.
In my simulation it’s the homogenous proton beam(the particle number is 1000 000) impinge the Ta target. I think it’s not all the protons impinge the target will undergo nuclear reactions. Most protons hit electrons and lost energy because of collision. And according to cross sections for (p,xn)-reactions from Ta(181) 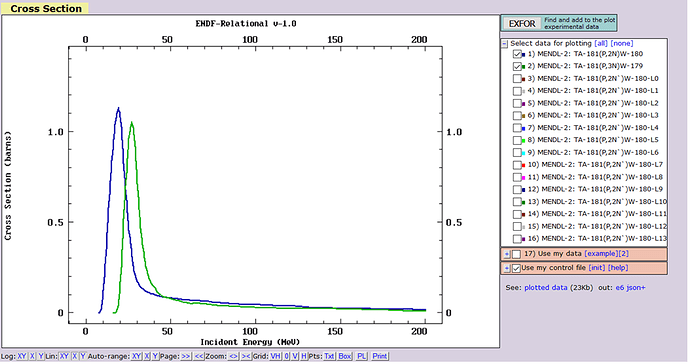 cross sections for (p,xn)-reactions from Ta(181)1054×557 138 KB
, when proton energy is below 10 MeV, there are very little probability that a nuclear reaction will occur. so there should be some protons die inside the target but do not undergo nuclear reactions. And these protons stopped inside the solid metal target will catch electrons, form H2 gas molecules, accumulate to hydrogen gas bubbles and finally break the metal target. For this purpose I want to localize the positions where protons stopped inside the target and record the numbers.

And I tried to use USRBIN card to get a proton fluence map, like this 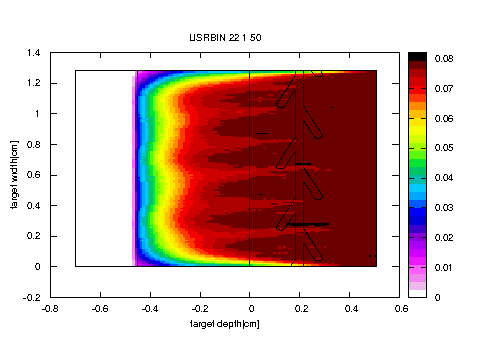 , it seems like I can’t get above information I’m interested in from the map. Or do I use USRBIN correctly?

I think it’s not all the protons impinge the target will undergo nuclear reactions.

Of course not all impinging protons undergo nuclear reactions. As I wrote above:

they stop (or disappear in nuclear reactions).

Stopping is a likely alternative to undergoing nuclear reactions.

I assume you are using a USRBIN card scoring PROTON. Apply it first to a simple geometry consisting of a cylindrical target impacted by a standard beam spot. By plotting a 1D fluence profile along the beam direction, you will see where the protons stop (if you score BEAMPART instead of PROTON, you will see where the primary protons stop). Once you have properly digested this, you can move to the actual geometry and impinging beam distribution.