Dear all,
I see people here using Fluka on the Windows Subsystem for Linux (WSL). Microsoft originally advertised WSL as a command-line interface only, but with an X-windows system, it looks like a real alternative to a “native” Linux computer.
My question is, if I compare on the same hardware a native installion of a certain Fluka-compatible Linux flavour, with the same OS installed under WSL, will I observe a difference in performance when running Fluka ?

Thank you for any experience you can share,
Thomas

in CPU heavy operation the overhead of WSL is minimal compared to a Bare metal Linux installation. The most noticeable disadvantage the disk I/O performance (requiring more time to write files), but not much else.

Now there is an option to install WSL 2 using Microsoft Hyper-V virtual machine, which improves almost all aspects of WSL. The only drawback is that WSL 2 is not compatible with other virtualization software, (i.e. VirtualBox won’t work if WSL 2 is installed in the PC).

Windows 10 has a completely different architecture than Windows in the past and even Windows itself runs like a lightweight virtual machine on top of a hypervisor layer. In parallel to that the Linux kernel is executed on (almost) the same layer as the Windows kernel and thus, overhead is minimal. 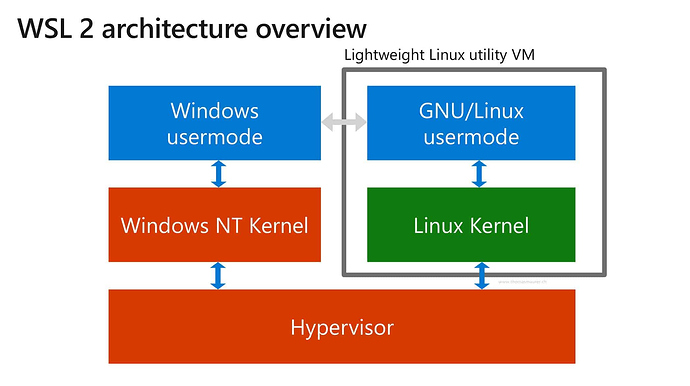 I don’t have exact numbers for FLUKA as I don’t have a real dual boot system available right now but I run it under WSL without any notable performance drawback. As long as your calculations can be satisfied by a single machine then I would say WSL or bare Linux are practically equivalent.

This is also confirmed by benchmarks that have been done for CPU intensive applications:
https://www.phoronix.com/scan.php?page=article&item=wsl-windows-eo2019&num=5