In this priliminary simulaton, I tried to get the neutron yield as given in this paper: Neutron yield and dose equivalent from heavy ion interactions on thick target - ScienceDirect

Can you please guide if I am missing any card or interaction phenomena ?

My take on this, as the author of the paper that you cited, is as follows.
As mentioned in the article, 7Li breakup in a Coulomb field is a possibility and has been studied well by other researchers, but I did not extend the study to investigate it from that angle. Such a breakup will reduce the excitation energy of the compound nucleus formed and thus the emission rate. The PEANUT model in FLUKA calculates the emission through a fully fused compound nucleus using Weisskopf-Ewing evaporation model at the energies you have mentioned which can give a higher emission rate. This is true for some of the other popular statistical nuclear reaction model codes also such as PACE, EMPIRE (which uses the Hauser-Feshbach model), ALICE etc. I don’t know of a code that can take into account projectile breakup and I will be pleasantly surprised if FLUKA can handle it.
Having said that, I would be remiss if I didn’t point out at least one later work with a different measurement technique has come up with a higher value, but it may not at the same incident energy. See Gikal et. al.
Sunil

Dear all, following up from Sunil’s welcome considerations, I’d like to point out that in FLUKA the 7Li + Cu reaction goes through the BME model, which - at the considered energy - always adopts the complete fusion mechanism he indicated, followed in the present case by the PEANUT pre-equilibrium and the mentioned evaporation module.
While confirming at first glance the two orders of magnitude discrepancy in the neutron yield reported by Riya with respect to the quoted data, a quick benchmarking for relevant (7Li + natCu) reaction channels at ~40 MeV shows a quite reasonable agreement between FLUKA results and available EXFOR data (from a 2021 publication), namely within 10% for the production cross section of 67Ga, and up to a factor 2.5 overestimation for 68Ga.

Thank you @ceruttif and @sunil for the references and discussions. I tried with the Li beam energy of 1.33 MeV/ nucleon as carried out in the following paper:

Although in both these cases in tab.lis, the relative statistical error is much higher than the acceptable limit, although a primary of 2E+9 was used.

After some initial reading on nuclear models, I wanted to reproduce the plots given in Fig 4 using FLUKA.

I tried to expore USRYIELD card, but I am not sure from where I can choose Ga - 69. I think this is not the correct way.

Which variable in FLUKA denotes the cross section ?

As a separate note, when I clicked on kind, there are two options d2 sigma/dx1 dx2. Are these two options same ? 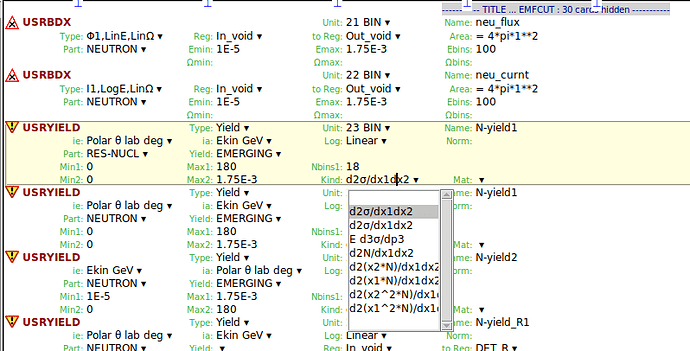 To sort the desired nucleus, select HEAVYION in USRYIELD and add an AUXSCORE card with the respective A and Z, to be associated to the USRYIELD detector.

Select the second sigma option in the USRYIELD Kind, which allows you to set the proper material (COPPER) in the nearby Mat menu (this is essential for cross section - and LET - calculation).

[Note that the polar angle (by definition of spherical coordinates) cannot exceed pi].

In order to get 7Li reactions at the input energy (and not at various decreasing energies, which makes the cross section scoring pointless), redefine the COPPER material by selecting AIR as alternate material for ionisation processes in the MATERIAL card:

(as seen in the FLUKA view of Flair).
To the same purpose, you may want to keep the target thin (to avoid polluting secondary interactions) and bias the HEAVYION inelastic scattering length in COPPER by the LAM-BIAS card (INEPRI, i.e. for primary 7Li ions only).

Finally, the total response that you will read in the USRYIELD sum.lis file, will still need to be properly normalized, prior to becoming the integral cross section value in mb.
First, you need to multiply by the USRYIELD second variable interval (I suggest to choose Particle Charge and set 30.5 and 31.5 as limits, which intercepts Ga and requires no multiplication, being an unit interval).
Then, you need to divide by the 7Li reaction probability, since USRYIELD results are given per incident 7Li ion, and not interacting 7Li ion. This is the Number of stars generated by HEAVYION, which is printed towards the end of the standard output file and should be very close to 100%, as a proof that secondary interactions did not pollute the result.