Dear expert
I am trying to compare the neutron yield when the proton beam interacts with PbBi target with the one reported using the other codes. I want to confirm if the result I intend to report is really the one I suppose to report from fluka result. I use the one in 001.out file. 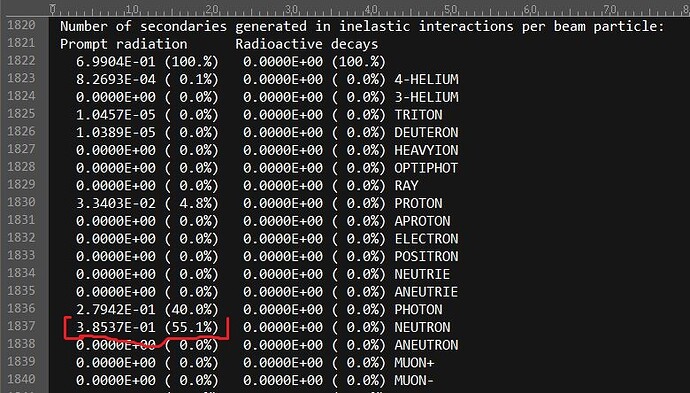 Hi Saheed @profftee97,
that number (0.385) shall be intended as the number of neutrons generated on average in your geometry by one beam proton, without considering those possibly generated in turn by low energy (<20 MeV) neutrons, but including those generated by other secondary interactions (e.g., from >20 MeV neutrons). So, a priori it does not coincide with the number of neutrons generated on average by one proton interaction (you can look just above in the output file at the Number of stars generated per beam particle, where stars mean exactly inelastic interactions, again apart from those by low energy neutrons, and you will see how many of them derive on average from one beam proton and by which particles are actually generated). Therefore, for your comparison purposes, the relevance of that number depends on how the neutron yield is actually defined.