Physics Models by Particle and Energy

FLUKA Experts,
I am attempting to create an energy- and particle-dependent diagram that demonstrates broadly which physics models FLUKA (v4-2.2) implements for its calculations. We have done our best with the information contained in the users’ manual and some of the references. Prior to publishing this figure, I wanted to submit it here for your review to avoid the possibility of providing superseded or incorrect information and to make sure that I have highlighted the most

Thanks for crosschecking, John.
One should acknowledge that a summary of this kind is almost unavoidably approximate and incomplete, so it’s intrinsically risky, since it may be misleading. Here I see a few issues to fix:
i. There is some confusion between transport models and nuclear reaction models. Multiple Coulomb Scattering, which fits in the first category, applies to protons and ions too. The first category features in addition stopping power and ionization for all charged particles.
ii. The treatment of electrons, positrons, muons, photons is certainly not limited to 1 GeV, but covers the full range you consider. Moreover, you indicate nuclear reactions for photons (quoting three of the four models applying to different energy ranges), but you omit that these concern also muons, electrons and positrons (by means of virtual photon production and interaction with the target nucleus).
iii. Nuclear reaction models are irrelevant below 1 MeV (apart from neutrons, where anyway library data are used instead, down to thermal energies, i.e. much below your lower limit).
In the ion case, the energy scale should be intended per nucleon.
A dedicated interaction model applies to deuterons below 150 MeV/n.
For protons and neutrons, the Dual Parton Model is still part of the PEANUT framework (as an alternative to the resonance production and decay in use at lower energies), comprising pre-equilibrium and evaporation/fission/fragmentation and gamma de-excitation as subsequent reaction stages.
For ions, electromagnetic dissociation is relevant too, in parallel to the indicated nuclear interaction models.
Hope this helps

Francesco,
Thank you so much for your feedback. I have attached an updated version here that incorporates your feedback both for the benefit of the group and in case you see any other issues. Best, John 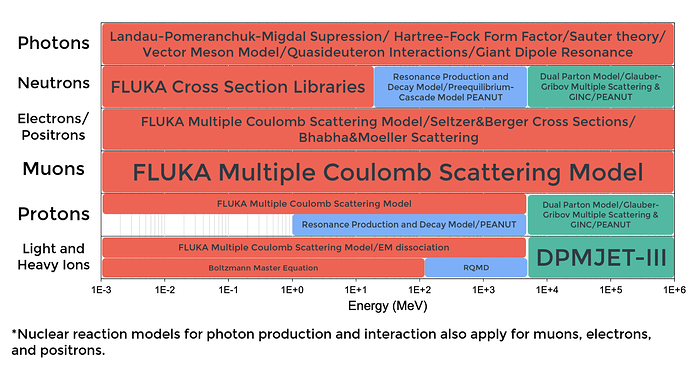 Thanks for sharing again.
I’d reword the note as: Also muons, electrons and positrons undergo photonuclear reactions.
Then, for photons, add Delta resonance before GDR.
EM dissociation should go in parallel to DPMJET, as it does for RQMD.

Albeit not aiming to be exhaustive/precise, one should still keep in mind that - in addition to charged particle ionization, you do not include (you just indicate MCS) - bremsstrahlung and pair production applies also to muons and charged hadrons.

Hi Francesco,
For light and heavy ions, FLUKA threshold for the BME model is ~100 MeV/u while the figure indicates it as 1e-3 MeV. Also, I think the equilibrium model should exist in the low energy region for this category as well.

Hi Sunil,
the upper limit for BME is in the range between 100 and 150 MeV/n, which is consistent with the figure.
In fact, BME is limited to 150 MeV/n, but in the aforementioned range it co-exists with RQMD: FLUKA decides randomly which model shall be used for the current interaction, with a 50-50 sharing at 125 MeV/n, 0-100 sharing at 150 MeV/n and 100-0 sharing at 100 MeV/n (for ion energies below 100 MeV/n, only BME applies). The user can adjust the way of handling this model transition, by means of the PHYSICS card.
You are right about the lower limit, which should rather be 1 MeV/n, as I commented above and the figure indicates for protons.
If with equilibrium model you mean the last stage of the reaction, it’s true that the excited nuclei generated by BME, RQMD and DPMJET are eventually treated by the same evaporation/fission/fragmentation and gamma de-excitation module I recalled. Before that, BME and RQMD are even coupled to the PEANUT pre-equilibrium. But such a complexity brings back to the structural limitations of a summary picture.

Thank you again, Francesco - after his change, here is the updated figure: 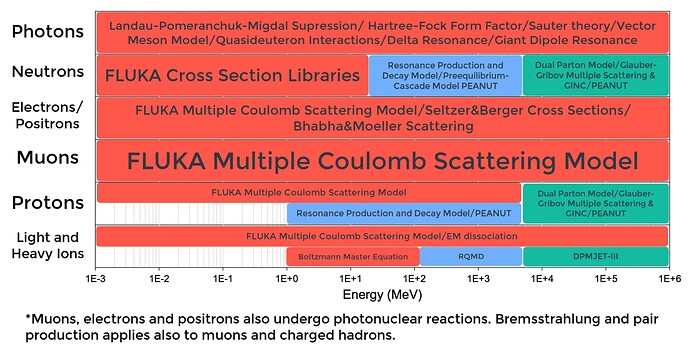 I would like to iterate once more (as Francesco already did above) that the figure risks to give a rather selective view of the models since it is not complete.

For example, for electrons and positrons you chose to mention delta-ray production (Bhabha&Moeller), while you don’t mention ionizing energy loss at all for other particles although ionization is very much of relevance for all charged particles.

Please also note that the different photon processes are usually relevant in distinct energy ranges only. Listing all photon models in a single box, which extends over all energies, yields a somewhat inaccurate picture (considering that the table means to show applicability of models at different energies).

Also note that multiple scattering for protons should extend over the full energy range.

I don’t want to sound discouraging, but I just want to raise once more your awareness that the table could be considered as inaccurate when shown in a presentation or paper. Creating such a table is intrinsically difficult, but maybe it could be easier to focus only hadronic physics models?

Anton,
Thank you for your reply. I am working to generate this table to give a broad overview of FLUKA’s specific model choices in comparison to other codes for a paper that undertakes a code comparison. Our reviewers have requested such a figure, and my intention is to provide a figure that at least communicates the unique features of FLUKA in comparison to other code, while not being selective or misleading. It is also difficult to select which reactions to highlight as unique or interesting while being as comprehensive as possible.

Do you think that this table would be better if we eliminated some of these details (such as the delta ray production, which as you mention applies to all charged particles)? For instance, I could reduce the electron/positron models to just multiple scattering?

I used the FLUKA course materials, the user’s manual, and several of the referenced papers in an effort to determine how these models are integrated, but I found it very difficult to decode based on the level of detail and the evolution of the code’s models over time.

Thank you again for your thoughts.
John

Anton, I wanted to follow up on my earlier message regarding this topic, which is now locked. Do you think that this simplified diagram, which avoids the issues you pointed out with the photon energies, would be reasonable? Our paper has now been accepted for publication, and I want to represent FLUKA in comparison to the other codes as well as I can within the limitations of this format, while not being misleading or incorrect. Thank you again for your help. John 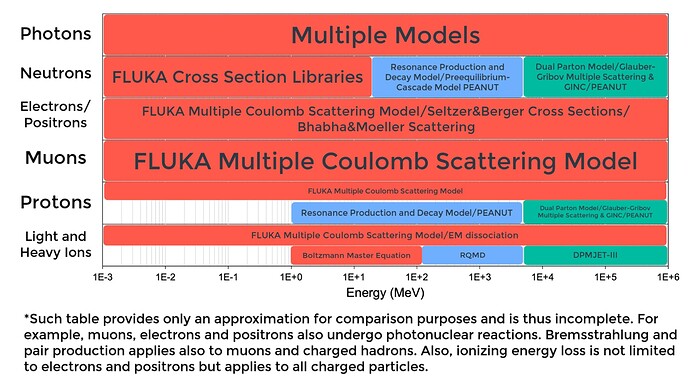 Hi John, I’m afraid that indicating Multiple Models is not really helpful nor answers the reviewers’ request. Also, the mention of photonuclear reactions, bremsstrahlung and pair production, and ionization in the note is not understandable, due to the fact that they do not explicitly appear at all in the table.

In order to be constructive, rather than accurate, I suggest the following (for your specific purposes and not as general reference):

This way, the note on the bottom becomes meaningful.

Francesco, Thank you so much for your help and clarification. I am attaching a version here that incorporates the changes that you indicate. We certainly understand that a table like this is incomplete by its nature, but I am hopeful that it will provide some context for our forthcoming code comparison paper. Please let me know if you see any additional issues. Thank you again. John 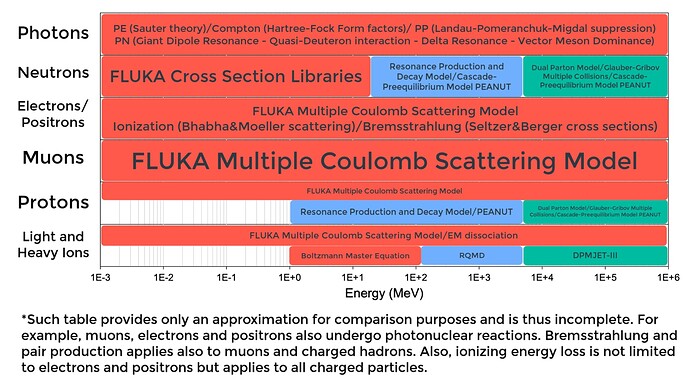