I am simulating a pencil proton beam hitting a cube of water. I wanted to find the points in space where the prompt gammas (from inelastic proton-nucleus interaction) are created and also their energy. I had created the topic “prompt gamma spatial resolution” where you have given me useful advice. I think I have managed to write a user routine and get some results. Also from these results I extracted the spectrum of these prompt gammas. The peaks are in the place where I expect them to be. I do not understand what the low count gammas (gammas between the peaks) represent. Since I have given instructions to count only prompt gammas from proton interactions I can’t understand why these gammas appear. is there something wrong with my user routine or the way I perceive FLUKA? 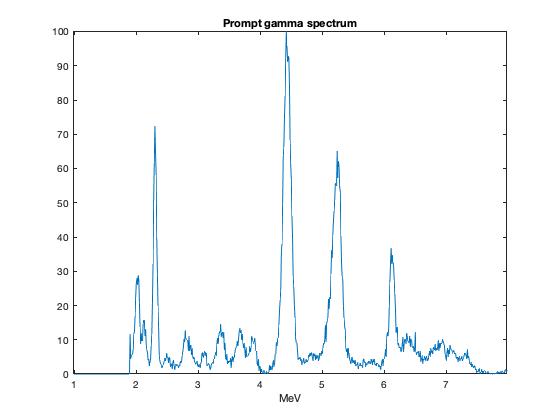 I would like to add another question. I ran again the simulation without narrowing it down only to prompt gammas for protons. That means I will also have contribution from neutrons. I get the following spectrum. Why the peak at 2.22 MeV that comes from neutron capture peak for hydrogen is narrow and the other peaks are wide? Thank you again and forgive my ignorance, I am new to FLUKA. 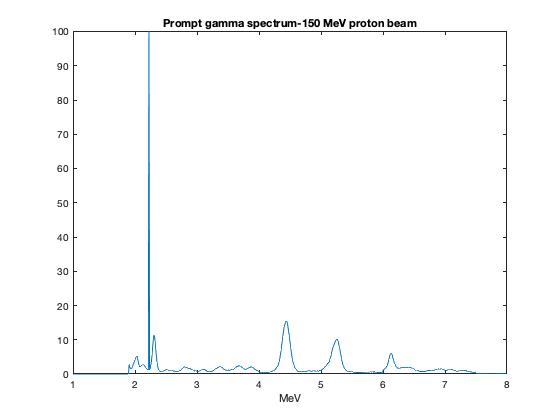 Thanks for your post(s) and apologies for the extended delay.

All photon lines you see are indeed gamma lines from the final de-excitation stages of a nuclear reaction starting on oxygen (16O, 17O, and 18O as per the natural isotopic composition of O implied when you take the FLUKA default material WATER). The fact that these lines have a certain width is a kinematic effect (à la Doppler broadening) due to the boost from the rest frame of the emitting nucleus back to the lab.

For the gamma line from neutron capture on H, if you take a look at the neutron kinetic energies leading to the ~2.22 MeV gammas you’ll see they’re in the order of some meV. Thus, the kinetic energy contributed by the neutron to the invariant mass is negligible compared to the rest mass of neutron plus that of the proton. If one does the kinematics considering that the products involve a deuteron and a photon, one sees that the CM energy of the photon must be ~2.22 MeV, and if you boost back to the lab (comparing what happens to forward vs backward emission of this gamma in the photon-deuteron center of mass) you conclude that the width of the line is negligible, so the peak remains sharp: the photon energy and the deuteron mass essentially exhaust the invariant mass.

For the other lines, note that we start the p+A reaction with a healthy proton energy of 150 MeV (minus whatever was lost to electronic stopping by the time the nuclear interaction takes place). The subsequent emissions of some MeV gammas in the final stages of the reaction does not happen to exhaust the invariant mass (some of it may incidentally have already gone into e.g. emitted nucleons) and this leaves the kinematics more wiggle room for energy and momentum sharing with the residual nucleus, hence the broadened lines.

I 've just seen your reply, for some reason it went to my spam folder. Thank you very much, this is very helpful. If I have any other questions on this topic I will contact you again.