Continuing the discussion from Interpretation of results from activation simulation:

Interpretation of results from activation simulation

If I find a better approach I let you know asap.

Just for future reference, I am attaching this journal paper. My intention was to explore if FLUKA can be used throughout the whole process mentioned in this attached journal (where they have used FLUKA for the first part and ORIGEN2 for the second part). I felt FLUKA could be more efficient tool for the second part also since it is already equipped with latest decay data and cross section data.

They have used ORIGEN and obtained the following result:

Thank you for the paper and the information.
Did you try what I proposed to you in the previous thread?

Sorry for the delayed response. I tried to follow the 2nd method. Is this what you meant ?? Here I have put A and Z for Mo which emits beta (for testing the usrrnc).

Yes, In that case you will ‘leave alive’ just those isotopes.
The contribution of any other isotope in the fluence calculation will not be considered.
I tried your code and it seems to be working fine for me, and you are doing correctly what I proposed to you. Very well done

Let me know if you have any further questions.

Thank you for confirming the routine. I have few questions regarding this routine.

Thanks Sir. I don’t have clear how to access this user routine since it’s the first time I am working with a user defined source. How can I open it? Thanks, Lovepreet

Ok, I found the problem. Actually there is an error in your routine.

I have used the above routine. Can you please check if the USERWEIG setting is added properly ?

I have observed a few things: 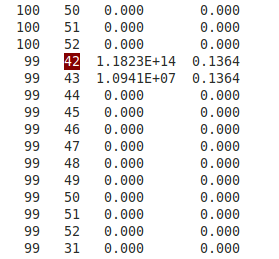 Ok, I’ll reply first your questions and then I propose you a new option that I found:

Anyways, if you are interested in this routine, we can discuss it in another moment.
Now, in order to obtain the scoring that you are looking for, I realized that you could you the routine usrmed.f. I attach here an example for your case.
In the manual you can observe that if you want to call this routine you need to add a card called MAT-PROP. There, with the USERDIRE option you can call this routine. The routine will be called every time a particle is going to be transported in one of the materials defined in MAT-PROP.
Finally, what you will find in the usrmed routine:

What does it mean? It means that only the photons generated by A = 99 and Z =42 will be considered in your scoring

I hope It is a satisfactory solution to your problem.
As I said I attach the routine and the input file with the MAT-PROP card and a USRTRACK example to score the fluence.

Thank you @adonadon for the solution. I am sorry for my late response, somehow I missed the post.

For example, lets say I have two targets lets say target 1, target 2 . They are made of different materials (M1 and M2), but after neutron activation, both of them has produced Co 60 (lets say) along with other radionuclides. Now, in the usrmed.f routine, If I set IJ = 7 and A = 60, Z = 27, along with in the MATPROP, if I choose M1 only, then this routine will be active for M1 material (Target 1) only, right ? The other M2 material (Target 2) will not be affected by this. That is, in USRTRACK, I will get photon scoring from Co 60 generated in Target 1 as well as all other photons from other one or more radionuclides generated in Target 2. Is this how this routine works?

What you explain is correct, but in case you want to do the same for the material M2, you can extend the material in the MAT-PROP using WHAT(5), or adding a second MAT-PROP card.

I am filtering from Mo 99 (not Mo 100) which emits some gammas. (http://www.nucleide.org/DDEP_WG/Nuclides/Mo-99_tables.pdf) . Then I feel some scoring should be there at det region.

Ups, true. I was using an old routine filtering with A = 100. Sorry about that.

Yes, you are totally right. The problem is that the number photons reaching your detector is too low…
You can observe this in the following picture where 10000 primaries were used:

I consider that the question about the “wise” photon release is solved with the option of using the usrmed routine that I proposed to you above. The way to score properly these photons is a different problem that may deserve its own thread…

I recommend you to generate a new one in case that you still need more assistance.
Thanks.

To conclude, a few questions:

Thank you @adonadon for the detailed discussion. May I know how you have visualized the above image ? Have you used any specific scoring card whose output you have added in the layers option in the geometry viewer tab?

Also, I was wondering why is there some kind of bias of photons towards the inner void? The neutron source is at the center. Mo 99 is getting produced in the target. The decay of Mo 99 will produce some gammas which should move out from the target isotropically. From the image it seems there are more photons inside than outside.
From my understanding, this can be due to one of the two reasons.

I recommend you to add an extra MAT-PROP card in the inner void. Many decays are occurring in this region. Then, if you do not add this extra card, there will be photons from other isotopes that you are will not be filtering

One more query, suppose I want to employ MAT-PROP in the inside void, not the outside void. Is there any way to do it ? I mean since the material is same in both the regions, is there any way to choose one void region only ?

Now, regarding your questions,

May I know how you have visualized the above image ?

This is a USERDUMP, take a look to the manual for details on how to use it. Its output can be visualized using the geometry tab of Flair in a similar way as an USRBIN, simply adding a Userdump instead of it.

Either the inner photons are from all the radionuclides produced after neutron activation which emit gammas (since I have not used MAT-PROP in the inner void, there no filtering is acting).

No, all photons are created in the target, so you do not need to filter anything in your void regions. They are all already affected by your filtering in the target material. This you can test very easily, set the weight of all photons to zero in your usrmed.f routine and keep only the MAT-PROP card for your target, then run your simulation and try to score photons (with USRBIN for instance). You will find out that you cannot, because you have killed all your photons.

Or, the target is not uniformly irradiated by neutrons, the irradiation is more in the inner portion and less in the outside ???

This you can find out by scoring neutron fluence using a USRBIN, in fact I would recommend you to always do so to cross-check your sources. But it is perfectly normal that you have more photons (and neutrons) inside the void region in your target. Your neutrons have very low energy so they will interact very easily with your material as soon as they go inside it, either to be captured or to scatter, likely back to your inner void, finding again your target on the other side of it. As result you have a higher neutron fluence in the inner parts of your U than in the outer. Therefore your photons will be more likely to be produced in the inner side of your U. Also, if they are emitted towards inside your target, they may scatter at the other side, maybe coming back inside (so one photon may be producing more than one line in Andre’s picture), while those that go outside never come back. This is why you see a higher track density in the inner void than in the outer.

suppose I want to employ MAT-PROP in the inside void, not the outside void. Is there any way to do it ?

As mentioned, you do not need to do so, but the easiest would be to discriminate between the different regions using the region number provided in the routine, which can be used to obtain the region name.

Thank you @fogallar for the suggestions and explanations. The topic is clear to me now.