In continuation to the previous discussion Biasing in FLUKA - #2 by horvathd,
I tried to modify the source.f, transported photons were registered for some histories, then it got stopped due to some error. Here I am attaching the .out and .err file. Can you please tell me what is the error showing here ?

To test whether the sampling rules are written properly or not, I took a print of XFLKA, YFLKA, ZFLKA for 1000 histories for a single cycle. The plot is according to my intention. (please note a cylindrical volume has been rejected from sampling, since a phantom will be placed there in second step). The sampling is less in outer area and sampling is more as the region is closer to the cylindrical region. To compensate that, weights have been assigned accordingly. 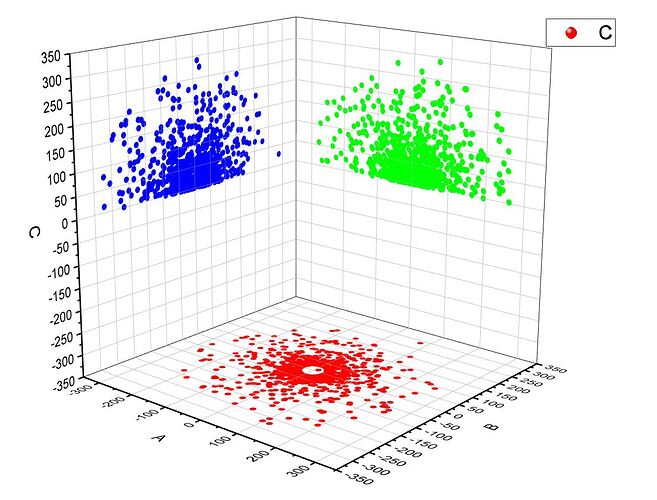 I took the print in log file, after 1000 histories, here is the log file. Some error is printing there also. I am unable to interpret it.

Could you please share your source routine as well?
Thanks

There was one mistake in radius sampling, I have modified it and hence the revised plot and revised log file have been edited in the previous post. I will mail you the source file to you personally.

In regards to the previous post Source sampling with variable weight and probability, I have sent the source file. Can you please confirm whether you have received it ? I tried to sent it to @amario personally. From my end, there was some internet issue while uploading it.

the issue is the missing line

FLUKA stores the total primary weight in the WEIPRI variable.

However, looking at your source routine I have some pointers:

Based on these points, I reworked your source routine with the new template. This should work correctly: cloud_source_v4.f (11.3 KB)

As far as I remember, I have converted the source.f using the python script and there was no error while building and executing it.

Also, my intention was to sample points as performed in ICRP 144, as was discussed in Biasing in FLUKA - #2 by horvathd, so I tried to divide the sphere in 7 shells and adjusted the sampling (forcing maximum sampling near the cylindrical target) , and since by this the uniformity is lost, I tried to adjust their weights (1 being the outer most shell and then gradually decreasing as it comes closer to the cylinder) . Since this cannot be done using built in cards, I wrote direction sampling and position sampling.

the converted old source routines should work in most cases without any problem, but it is nice to keep them up to date, and more importantly if you start writing a new one from scratch.

I was aware the goal of the source routine, but I didn’t understand how the calculations worked in yours.

Thank you @horvathd, I have just gone through your modified routine. It is written so well and compact, thank you again. Mine was soo childish. Also, I thought the way/rate the surface is increasing, that rate I should incorporate as the probability/ weight. But that was not at all necessary. So, thank you again for the help.

In your source file, I have some observations.

Plus, here are a couple other optional points which can be implemented to further optimize the source routine:

Thank you @horvathd, I will implement 5 and 6 points.