Thermal neutron-10B He energy on boundary

Dear FLUKA experts,
I am interested in the energy of He arising from thermal neutron-10Boron reaction at the border of 10Boron-Carbon layers. The point is to understand the energy spectrum of the He atoms in order to optimize a detector. The general geometry is as follows 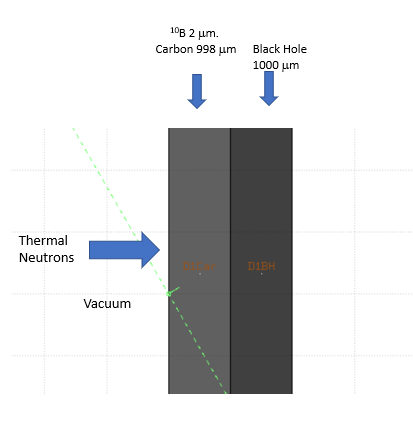 The layers are vacuum, 2 microns of 10B, 998 microns of Carbon and finally 1 mm of black hole. The energy of the He particles is measured on the border of the 10Boron/Carbon using USRBDX. The result is as shown.

All help and insight on the issue would be greatly appreciated.

Seeing this discontinuity at 100 keV one might immediately suspect that it is due to the selected transport threshold, which for the PRECISIOn option in the DEFAULTS card is indeed 100 keV for alphas (most relevant here) and most other particles except neutrons, which are transported down to 10^{-14} GeV.

Indeed, if you reduce the transport thresholds down to e.g. 10 keV via a PART-THR card (taking care not to apply this threshold also to neutrons) then this artefact disappears from your plot - but of course can be found again at 10 keV if you extend your scoring to lower energies. In any case, any value below the threshold is unreliable and should be ignored.

To see what threshold was applied to different particle species you can consult an output file, e.g. …001.out. Open it in Flair via the Run > Files tab and navigate to Particle Thresholds.

On a more general note, you might consider avoiding the use of RPPs with shared surfaces for your region definitions, as these might cause some tracking ambiguities. In your case you could for example use a single RPP enclosing all 3 layers and cut it with two planes.

In your material definitions it is advisable to leave the Am field empty, as the code retrieves the proper atomic mass from its database. The #6 in your CARBON definition should also be removed. The SILICON definition is superfluous since (natural) silicon is pre-defined and can be directly selected (in any case you are not using silicon in this run). The same goes for CARBON, unless you really want to modify the density as you seem to have done here, presumably thinking of a diamond detector.

In addition to the above, I neglected to mention that you could profit from the important addition of full point-wise transport for “low-energy” (<20MeV) neutrons introduced in the latest major release. On the whole, this should provide the most accurate treatment of your (thermal neutron) problem.

See the relevant section of the manual (LOW-PWXS is the relevant card):
https://flukafiles.web.cern.ch/manual/chapters/low_energy_neutrons/pointwise_transport.html#

First, thank you very much for your thorough reply. I applied your remedy to the threshold “low energy” values for alpha and other particles (and as you say not including neutrons in the change). The anomaly disappeared and the curve now appears reasonable.

As you noted the “carbon” as used here is in diamond density as intended. This input file was edited down from a much larger one to isolate the problem I described in the post and has flaws (sloppy coding) which will be corrected.

I also intend to incorporate the full point-wise transport for low energy neutrons when other issues are remedied in the simulation(s). Thank you very much for bringing that to my attention.