Dear FLUKA expert,
This is my first time to use user routine.
I want to simulate a wavelength shifting fiber,we know it has absorption spectrum and emission spectrum.

Dear@ceruttif ,
For wvlnsh.f ,if I use these card and compiled the user routine ,it will automatically called?(the material of wavelength shifting fiber is POLYSTYR) 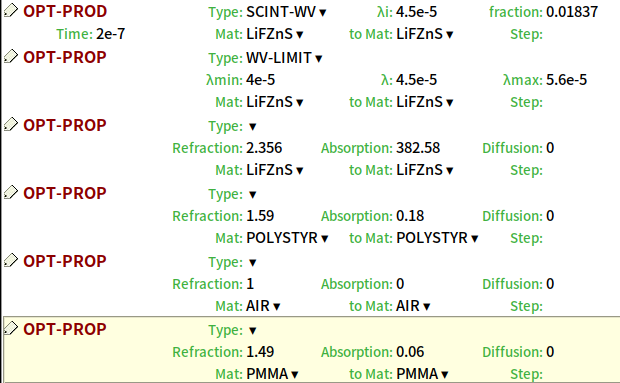 See this dedicated discussion and please note the difference between INPUT variables and OUTPUT variables: evidently you need to set the latter ones only (by the way MREG would require an integer, not a character string, but it’s an input variable not to be reset).

I want to get secondary photons’ angular distribution (the relationship of photon number and angular), should I use USRBDX or wvlnsh.f here?

wvlnsh.f is not a scoring routine, it serves to generate optical photons with a different wavelength as a formerly traveling optical photon is absorbed. Therefore, the resulting angular distribution on a given region boundary is rather provided by the USRBDX and USRYIELD cards.

The latter: as one optical photon is absorbed, NWVSHP wavelength shifted secondary photons are produced. You set it to the non-sense value of 23414 (while defining the properties of only the first of them), which necessarily leads to the resulting optical photon stack overflow (FLUKA cannot track a number of particles tending to infinite).

This was exactly answered, even with an implementation example by @cesc , in the February 2020 discussion I brought above to your attention.

Dear@ceruttif ,
I have read the topic you said once again and remembered it clearly ,thank you for your help.