When i started a new run a warning dialog showed up about flair file has been changed. 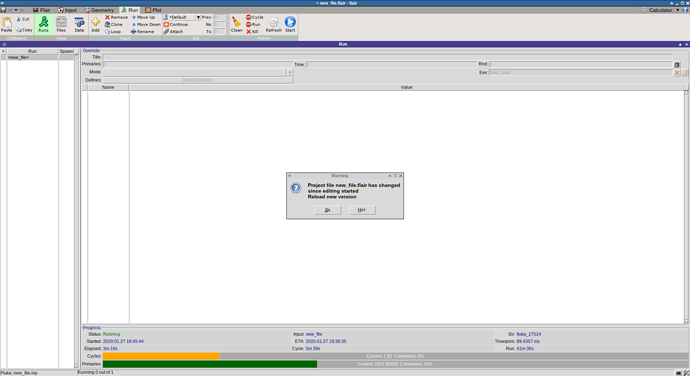 If i click “No” the warning dialog instantly reappears, if i click on “Yes” the status in progress bar becomes “Not Running” but the run is still working in the background. 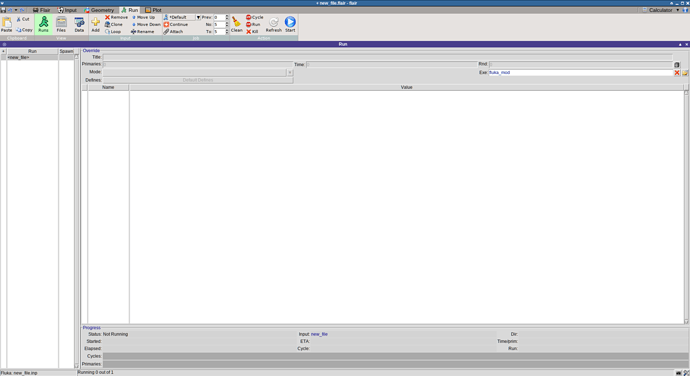 Does anybody encountered such problem, or its only me?

I cannot reproduce it. Do you run on an nfs mounted file system, windows or linux?
Could you provide some more information, like step by step instructions on how to reproduce it.
For example you open flair with the .inp or the .flair do you edit the file before running if yes what, can we have your .flair/.inp files…

After some testing i have found that the warning dialog appears when i open flair file in the external text editor (tested with geany and vim). Everything works fine when the editor program is closed.

Here is the link: https://yadi.sk/d/LWkAJR5LSzrm_g

Its a tar.gz archive.

Ok, I see. this is a feature of flair that if you edit manually with a text editor the .flair or the .inp it will reload them automatically when the focus goes back to flair.

In case that flair is also modified (for example you started a run or you edited the input) then flair will popup a window to ask you what you want to do, since it sees that the .flair file is modified and the project currently is also modified.

It could be, but i didn’t modified neither flair nor input, only open it with text editor (“rw” mode of opened file might be the reason). Its just unexpected feature.

This thread was obsoleted by the new flair version