What is the physical meaning of particle yield?

Dear fluka experts,
i want to experiment with USRYIELD card but i havent understand what particle yield is representing and i havent found an explanation yet.could you make it more clear to me?
thanks.

many thanks for your question. In the simplest picture, you can think of the particle yield simply as an amount of particles.

The USRYIELD card allows you to score the double differential yield of particles crossing the surface between two regions or emerging from an interaction. For example, the double differential yield (in energy and angle) of neutrons crossing the surface between region 1 and region 2 would be the number of neutrons with energy in the interval E +/- dE that cross the boundary between the two regions with a direction in the solid angle Ω +/- dΩ measured with respect to a fixed direction (the beam one, not the normal to the surface).

I made the most intuitive example with energy and angle but the scoring possibilities are numerous.
To have a clearer and more complete picture, you should have a look at the dedicated page in the manual (and, very important, the Notes at the bottom) and at the scoring 1 and scoring 2 lectures.

I hope this was helpful for you. Let me know in case you have further questions.
Best,
Davide

As far as the secondary particle yield is concerned, this clearly depends on the energy of the beam, on the primary particle and on the target material: the higher the energy, the higher would be the yield (more particle can be produced if you want)

Thank you very much ,i think its more clear to me now.But i run a simulation where i have a particle beam of 100Mev with 5 choises of primaries(photons ,electrons ,alpha particles,protons and neutrons) and a target of gold 5cm depth.i have 2 usryield cards ,the fist is for only electrons yield and the second for all particles yield on the output surface(gold->void) .but i obseve that yield is high in low energies and then decreases.i am sending the flair file and also a plot where the beam is alpha particles and i compute the all particles yield.
gold.flair (6.4 KB) 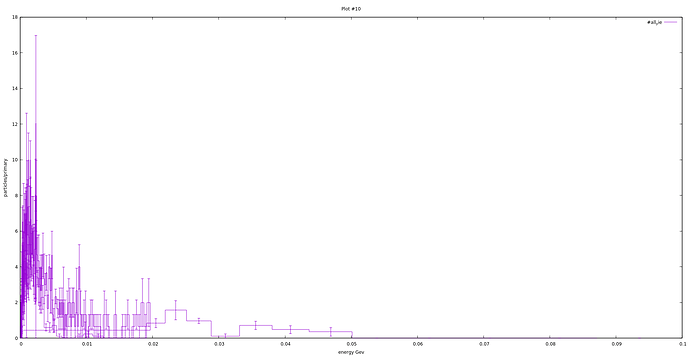 despite the large statistical fluctuation, I don’t see any large surprise in your result nor contradiction with what said before.

Apologies if I wasn’t explicit, so to avoid any confusion: the primary beam energy is always 100 MeV, what you see on the abscissa is the energy of the secondary particles crossing the two regions. This means that particles crossing the two regions have low energy and you can say that in this case the differential particle yield is decreasing with the secondary particle energy.

On a side note: it is always difficult to interpret the spectrum or yield of ALL-PART, it might be more convenient to separate the contributions that you are interested in. Indeed, from note 12 of the USRYIELD page of the manual:

Thank you very much.Does the same happen with usrtrack and usrbdx?i mean we talk about only the fluence of secondary particles subject to energy ?and also how can i decrease the statistical fluctuation?

Dear Artemis,
yes this should be the case unless you score the generalized particle type BEAMPART (primary source/beam particles).

To decrease the statistical fluctuation you can either increase the number of primary particles and/or you can introduce some biasing. To get familiar with it you can have a look at the lecture on biasing