A long time ago, I used FLUKA 4-0.1 version to calculate the photoneutron yields from 197Au(g,x)n, natPb(g,x)n, natSn(g,x)n reactions with Eg=16 MeV using USRYIELD card.
Recently, I have done the same calculations using the latest version of FLUKA 4-2.1
However, the results are quite different, particularly in the low-energy regions. The figure below shows the ratio of two FLUKA versions for the 197Au target at two different angles. For other targets, the discrepancy also was seen for other targets as well.
I checked the FLUKA update log files, and there was an explanation about a change in physics as " Spin and parity of the compound nucleus are now accounted for during the evaporation and Fermi break-up stages."

I really appreciate it if you could confirm such discrepancy is coming from that improvement. 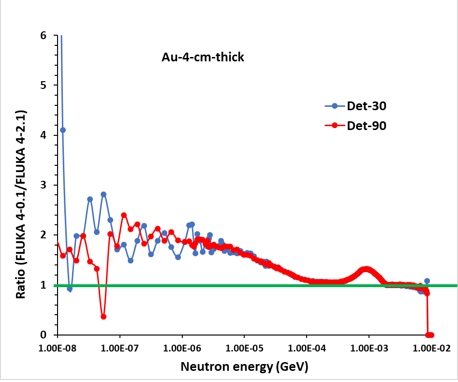 Hallo,
your post content evolved from its initial version, which is one of the advantages of this forum system. In fact, no difference is expected in regard to your case between FLUKA 4-1 and FLUKA 4-2, while the reported difference wrt FLUKA 4-0 was advertised in previous posts, starting from the original one of October 2020, and is indeed induced by the physics model improvement you point out, as indicated in the release notes as well as in the preceding forum discussion.
As a side remark, note that fluctuations below 10 keV or so are due to insufficient statistics on the low energy side of the neutron spectrum, where the yield considerably drops, as a proper lethargy plot (giving dn/dlogE - rather than dn/dE - as a function of logE) clearly shows.
You are welcome