Using TCQUENCH together with source subroutine

Dear Fluka experts,
I use isotope source 218Po together with source subroutine from the topic Volumetric source of complex geometry. Further, I want to use card TCQUENCH to set time cut-off for USRBIN scoring. However, when I set the cut-off to 3.1 minutes, there are too few generated alpha particles. When I don’t use the source subroutine, the number of produced particles is significantly higher. I compare these two cases on pictures. Am I doing something incorrectly? 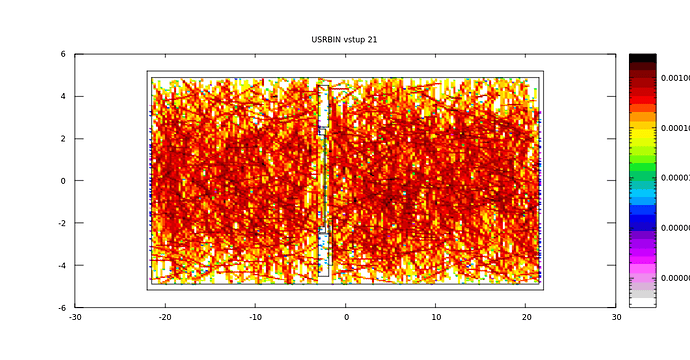 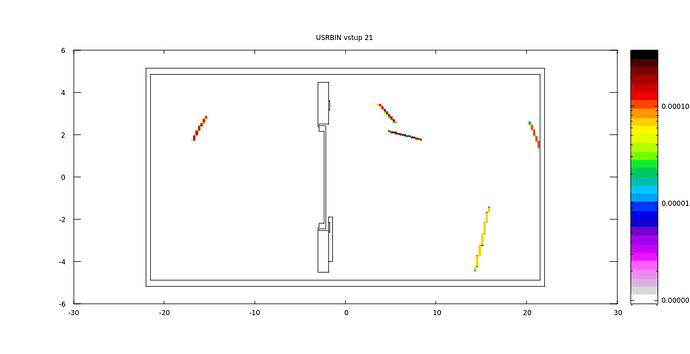 Dear @MichalSestak,
I’ve run your input twice, once with the default executable and once with the executable obtained compiling and linking your source routine. Otherwise, I didn’t touch the input.
In both cases I obtained results similar to your second picture. Can you give some more info about how you obtained the first picture? Did you change anything in the input?

Actually, I was able to replicate your first plot using the source routine with a recompiled executable but commenting out the TCQUENCH card. I also tried to use the default executable while the TCQUENCH card is commented out and in this case I also get a large number of particles, even if with a totally different spatial distribution, as to be expected given that the your source routine alters the spatial distribution of the primaries.

Dear Amario,
I obtained the first picture by commenting the SOURCE card and uncommenting the two BEAMPOS cards. The difference between using the SOURCE card and the BEAMPOS cards is that in case of the BEAMPOS cards the particles are generated everywhere inside the cylinder with diameter=4.87 cm and height=43 cm, while in case of the SOURCE card they are generated only in the air inside the cylinder. Because the air fills the most of the cylinder, it seems to me that visually there should be approximately the same number of alpha particle tracks in the pictures, which obviously isn’t. Note that I used the TCQUENCH card in both cases.
Hope I clarify it little bit,
Michal

thank you for reporting the problem, now I was able to reproduce it. Please allow us some time to investigate the cause.

Sorry for the late reply. The issue seems to be a missing line in the source user routine, so the starting time of the events wasn’t reset. This made the TCQUECH scorings incorrect.

You need to add the following line for the (Radioactive) isotope case (to line 108 in your case):

Dear Dávid,
now it seems to work, thank you. I find interesting that the line

isn’t in the default source.f file which is provided by flair.
Cheers,
Michal